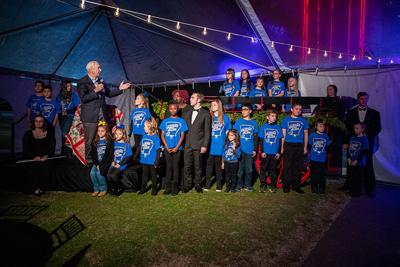 MAGNOLIA – Southern Arkansas University has launched the boldest fundraising initiative in its 110-year history. The Love and Loyalty Campaign aims to strengthen SAU’s commitment to affordability and innovation. The University’s public launch of the campaign took place through a series of events on Friday, December 6 and Saturday, December 7. During that time, alumni and friends experienced the advancements taking place at SAU. Attendees enjoyed a variety of activities including a trapshooting demonstration, rocket launch, presentation of student research posters, a reception with coaches, and more.

Through the Love and Loyalty Campaign, the University seeks to raise $22 million over five years to benefit student enrichment, faculty and staff support, academic programs, student life and community engagement, revitalized facilities and athletics. A major focus of this effort is the strengthening of the SAU Foundation endowment, which annually provides resources for scholarships, academic enrichments, professorships, and athletics.

The leadership phase of the campaign began in November 2016. Since that time, SAU alumni, friends, corporate partners, faculty and staff have graciously given more than 11,200 gifts, sparking the creation of 65 new endowments. These include SAU’s first endowed Dean’s Chair and its first endowed Department Chair.

Holding aloft the minutes from the very first Board of Trustees meeting, dating to 1909, the year of SAU’s founding, Dr. Trey Berry, president, asked those gathered to consider future generations of Muleriders. “The Third District Agricultural School was founded 110 years ago on the vision that south Arkansas matters,” Berry said. “We stand on the shoulders of many who came before us to pave the way for the success we now enjoy.”Noting that SAU serves a diverse student population from across the United States and around the world, Berry pointed to the University’s many new programs that are meeting the demands of a changing educational environment.

“We must remain forward thinking and innovative in a highly competitive world,” Berry said.

Beth Galway, a 1984 alumna and an officer of the SAU Alumni Association Board of Directors, spoke, calling her alma mater “a shining light to our lives and the community.” She asked everyone to consider the ways in which SAU has touched their lives.

“It was here that the late Louis Blanchard taught me about dedication to your profession and the people in your life,” Galway said. “It was here that Dr. Terry Stinson taught me to pay attention to details. They were channeling us to excellence.”

Joan Dempsey, a 1981 alumna, told the crowd that SAU helped define her life as well as her professional worth. “I learned at SAU how to think critically, write persuasively, and argue eloquently,” she said. “These skills have served me well in everything I’ve achieved.”

Dempsey announced that, as a legacy student, it was her pleasure to participate in the campaign by endowing a scholarship for education majors in the name of her father, James Riddle (’61).

Eboni Edwards, a senior performing arts major from Pine Bluff, Arkansas, gave a student’s perspective. “I came to SAU with my sights set high, and SAU has risen to my expectations,” she shared.

Generous giving benefits students every day. “During the stressful college audition process, SAU is set apart by its competitive scholarships. No matter the subject or career plan, scholarships are the way to our future,” said Edwards.

Edwards thanked Mrs. Dempsey for endowing a scholarship, as well as other donors for the gifts they have provided. “Thank you for all the ways you make being a Mulerider one of the greatest experiences of my life,” Edwards enthused.

Dr. Abdel Bachri, dean of the College of Science and Engineering (COSE), said that since joining the faculty in 2007, he has witnessed SAU’s commitment to meeting its goals. “I’ve seen the outpouring of support by administration, alumni, friends, and industry partners,” Bachri said. “As dean, I realize the tremendous role donors play in helping us build a program from the ground up. The support the College receives from donors is amazing.”

“Competition for Engineering students is challenging,” he said. “Our supporters have stepped up to provide resources for the scholarships that attract students to SAU.”

Ron LeMay, a 1967 alumnus of Southern State College, serves as co-chair of the campaign. He spoke about the importance of securing the advantages he enjoyed as a student.

“The work of philanthropy is significant,” he said. “Through giving, we transform organizations, and our giving transforms us. Together, we are able to accomplish so much.”

Ron Harrell, a 1956 graduate of Southern State College, spoke after children representing the future of SAU gathered onstage to “This Little Light of Mine.” He spoke of the responsibility of providing educational opportunities to future Muleriders. “This is not only our future, but the future of our country,” he said.

To learn more about the Love and Loyalty Campaign and how you can join this effort, please visit https://sauloveandloyalty.com.

We accept many different kinds of announcements. Just click on the button below and submit a form.